Can you guess what is it?

It’s a detail of Public Collection – Bologna, an on going project by Alexandra Pirici & Manuel Pelmuş, performed at Oratorio San Filippo Neri, during ARTEFIERA. It was the most sensible and fascinating work of art of the weekend. From my point of view, performance is the key factor of contemporary art, with its powerful language that can catch the attention of the people and drive it into reflections and creativity. 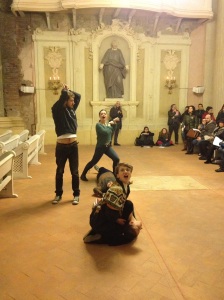